Here at the Alzheimer’s Research UK Oxford Drug Discovery Institute, all our researchers are incredibly passionate about fighting dementia. When in the lab, they are dedicated to discovering novel targets for the diseases that cause dementia, whilst outside of the lab taking part in all kinds of fundraising activity. Our scientists have put on bake sales, quiz nights and curry nights, as well as taking part in Alzheimer’s Research UK’s Yoga for Alzheimer’s event and doing sponsored races. Combining research with fundraising brings us closer to the goal of defeating dementia.

In the next few months, two of our researchers, Stephen Wren and Francesca Nicholls, are taking part in races and raising money for Alzheimer’s Research UK.

Stephen Wren is a highly experienced medicinal chemist, and has worked on a diverse set of biological targets over many disease areas in several organisations. He now works at Oxford DDI as a post-doctoral researcher, and his research involves the design and synthesis of organic compounds as potential drugs/tools for Alzheimer’s disease.

Stephen is running the Abingdon Marathon in October, to raise funds for Alzheimer’s Research UK. This is Stephen’s 5th marathon  and if you would like to support his efforts, please visit his donations page.

We at the Oxford Drug Discovery Institute are so proud of Stephen, who in his day-to-day work and his fundraising efforts is demonstrating the combined power of both science and society in the fight to defeat dementia.

Due to injury, Stephen regrettably has had to withdraw from the marathon, but plans to enter another event when he has recovered. 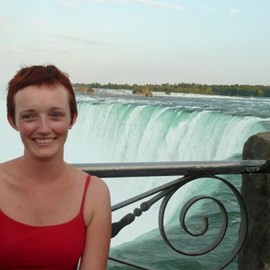 Francesca is part of the Department of Psychiatry working in Dr Simon Lovestone’s group on generating screening tools for Alzheimer’s disease. She is based with us in the Target Discovery Institute and works very closely with the Oxford Drug Discovery Institute.

Francesca says: “I didn’t know much about Alzheimer’s and dementia before I started working in the field. As I read more about it, I began to understand how devastating the condition is, and how complex the biology is. We’ve got a long way to go, but we can definitely get there. And the quicker we can find an intervention, the more people will be spared from going through the disease themselves or being a carer of someone affected. More money means that Alzheimer’s Research UK can allow more researchers to be hired, or more equipment to be purchased, all contributing to finding an intervention more quickly. I’m currently in the lucky and unusual position of not having any family or friends affected by dementia, but I know this can’t last unless we make significant progress soon.”

On top of her research, Francesca wanted to contribute further to defeating dementia, so she signed up for Alzheimer’s Research UK’s Race The Tide. She will walk 100km in 24 hours along St Cuthbert’s Way, racing to finish before the tide comes in and blocks off the causeway to the Holy Island of Lidisfarne. Francesca is walking proof that you don’t need to have run five marathons to raise money for dementia research.

To support Francesca’s efforts by sponsoring her race via her Just Giving page, please click here.

If you to would like to take part in Race The Tide, you can find out more and sign up here.

Every one of us has the power to defeat dementia, and if you are interested in fundraising for Alzheimer’s Research UK, please visit the website for information on existing fundraising activities and events that you can take part in, ideas on how to do your own fundraising, and to order a fundraising pack.